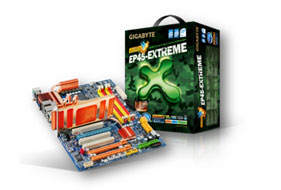 Taipei, Taiwan, July 04, 2008 – GIGABYTE UNITED INC., a leading manufacturer of motherboards and graphics cards today proudly announced the launch of the highly anticipated EP45-Extreme series of motherboards that target the extreme overclocking segment of the motherboard market. The series currently consists of the GA-EP45T-EXTREME for DDR3 users and the GA-EP45-EXTREME for those who still prefer using DDR2 memory; both motherboards are based on Intel’s latest P45 Express chipset.

Hybrid Silent-Pipe Delivering Maximum Cooling From Both Air and Water Cooling
GIGABYTE’s unique Hybrid Silent-Pipe slot cooling system utilizes the natural convection of air inside and outside the chassis to dramatically and noiselessly cool down the North Bridge, South Bridge and CPU MOSFETs without the use of a fan. The GIGABYTE Hybrid Silent-Pipe can also be used with water block cooling systems for additional enhanced thermal performance, or alternatively it can be totally removed by experienced overclockers who wish to use a copper pot with dry ice or LN2 extreme cooling on the North Bridge.

The EP45 Extreme series of motherboards from GIGABYTE are equipped with a 12 + 2 + 2 Phase power design for the CPU VRM, North Bridge and memory, offering overclockers a more stable supply of power that can ultimately help to achieve higher CPU and memory frequencies with better performance. Compared with only one phase solutions, this ensures longer power component lifespan and higher overclockability due to cooler working temperatures and better efficiency.

GIGABYTE has once again proven itself as the industry leader in energy saving technology with the recently introduced Dynamic Energy Saver Advanced that allows for even more power efficiency from high-performance motherboards due to improved algorithms that provide more accurate power saving calculations. Additionally, GIGABYTE Dynamic Energy Saver Advanced is the world’s only motherboard energy saving technology with hardware-based Dynamic 6-Gear* Switching that dynamically powers on or off the CPU power phases as the CPU loading varies. With support for VRD 11.1, GIGABYTE’s DES Advanced allows the motherboard to drop down to only one power phase during idle operation, allowing for a dramatic increase in power savings. The previous Dynamic Energy Saver from GIGABYTE only allowed a minimum of two power phases during idle use.

DualBIOS™ is a GIGABYTE patented technology that automatically recovers BIOS data when the main BIOS has crashed or failed. Featuring 2 physical BIOS ROMs integrated onboard, GIGABYTE DualBIOS™ allows quick and seamless recovery from BIOS damage or failure due to viruses or improper BIOS updating. 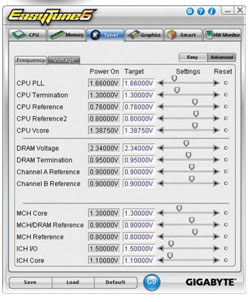 GIGABYTE has completely redesigned EasyTune6 from the ground up to make it easier than ever to manage and monitor your hardware resources as well as tweak your system settings in order to achieve maximum system performance. Whether you are an overclocking enthusiast, or a computer novice, EasyTune6 provides the tools you need to quickly and effortlessly fine tune your system.