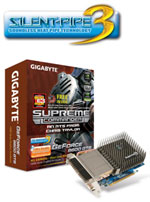 Silent-Pipe 3™: Features & Benefits
The GIGABYTE GV-NX86S256H comes bundled with the immensely popular Supreme Commander™, awarded Best Strategy Game at E3 2006. Supreme Commander™ is the first real-time strategy (RTS) computer game to deliver a truly strategic and tactical experience. Developed by Chris Taylor, Supreme Commander™ raises the bar for its sheer scope and scale of game play. With an enhanced storyline based around three warring factions, each with their own view of the future path humanity should take, Supreme Commander™ promises to fully immerse gamers in this futuristic fight for humanity. Game play is further propelled with breathtaking features such as the "Strategic zoom system", allowing players to zoom out far enough to view the entire map at a glance. Players can also zoom in close enough that larger units such as battleships fill most of the screen.

For more details of the GIGABYTE GV-NX86S256H, please visit the GIGABYTE VGA website:/products/main.aspx?s=43