"The Killer E2100 has excelled at delivering an optimal gaming experience, and with Bigfoot's new Advanced Stream Detect technology, users can now also enjoy automatic management of all network traffic including HD media streaming and communications," commented Richard Chen, VP of Worldwide Sales and Marketing at GIGABYTE. "We're thrilled to bring to able to bring this free update to our full range of GIGABYTE G1-Killer motherboards."

"Bigfoot Networks is the leader in high-performance networking for online games, and with our new Advanced Stream Detect technology, we now bring these same optimizations and performance enhancements to streaming video, audio and real-time communications applications," said Michael Howse, CEO of Bigfoot Networks. "Some of today's most popular applications such as Skype®, Youtube®, Netflix® and, of course, online games are the most sensitive to latency and network contention. Previously, you had to run network-intensive programs one at a time to achieve top performance. With Advanced Stream Detect, you can run videoconferencing, stream music and video, play games, and even download huge files in the background without affecting your online experience." 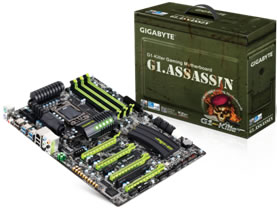 GIGABYTE G1-Killer Series
Featuring several state-of-the-art onboard solutions from industry leaders including Creative and Bigfoot Networks, as well as several unique GIGABYTE features, G1-Killers series motherboards are unlike any current gaming motherboard on the market. With the ultimate in multi-GPU support, dedicated on-board audio and advanced networking, GIGABYTE has brought some incredibly big guns to the party.


Killer Network Manager
Killer Network Manager is the software command and control center for all Killer networking products.  In addition to Advanced Stream Detect, Killer Network Manager includes other important product features including the PC Monitor, Application Blocking and Visual Bandwidth Control™, one of the crown jewels of the Bigfoot Networks software suite. Visual Bandwidth Control™ is an interactive, graphical interface that allows users to see how much bandwidth they're using, what applications are using it and provides the ability to control and tune bandwidth allocations for each application for optimal performance of all online applications.