First Ever Motherboard to Receive this Honor

Taipei, Taiwan, May 4th 2011 – GIGABYTE INC., a leading manufacturer of motherboards and graphics cards, today announced that the G1. Assassin motherboard has received the 'Design and Innovation' award from TAITRA (Taiwan External Trade and Development Council), the organizers of Computex 2011, in cooperation with iF International Forum Design. The GIGABYTE G1.Assassin motherboard is the first ever motherboard product to be awarded the coveted 'Design and Innovation' award, and was selected as the best example of unique component design, addressing the needs of elite gamers, a growing niche within the PC gaming market.

"At GIGABYTE we are both excited and proud to accept this award as recognition from our peers in the industry for the work we have done in developing the unique G1.Assassin motherboard," commented Richard Chen, VP of Worldwide Sales and Marketing at GIGABYTE. "This accolade underlines our commitment to offering elite gamers and system builders the absolute best PC gaming experience possible, delivering unique features you simply cannot find on any other motherboard product." 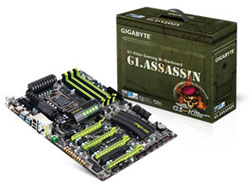 GIGABYTE G1.Assassin: Weaponize Yourself
Featuring several state-of-the-art onboard solutions from industry leaders including Creative and Bigfoot Networks, as well as several unique GIGABYTE features, the G1.Assassin motherboard is unlike any current gaming motherboard on the market. With the ultimate in multi-GPU support, dedicated on-board audio and advanced networking, GIGABYTE has brought out some incredibly big guns to the party, so lock & load soldiers, and get ready to unleash some mass gaming destruction.

GIGABYTE has equipped the G1. Assassin motherboard to offer utmost graphics flexibility and upgradeability, with multiple GPU support including 4-way CrossFireX™ and 3-SLI™ to deliver maximum FPS (Frames Per Second).

Super Hearing: Onboard Creative Soundblaster X-Fi Digital Audio Processor
The GIGABYTE G1. Assassin motherboard is one of the world's only gaming motherboards to feature Creative's top-of-the-line Soundblaster Digital Audio Processor (20K2) onboard with X-Fi Xtreme Fidelity® and EAX® Advanced HD™ 5.0 technologies, allowing you to experience sound in your gaming world exactly as you would in real life. 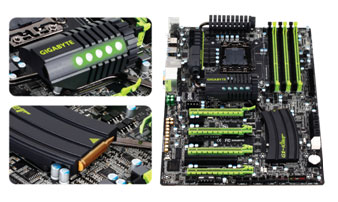 The GIGABYTE G1-Killer series features a brand new heatpipe that was designed to be as deadly to heat as it looks. By effectively spreading the heat from the critical areas of the motherboard such as the CPU VRM zone and quickly dissipating it, the GIGABYTE G1. Assassin remains cool, even when the battle heats up.


To learn more about the G1. Assassin motherboard and the other G1-Killer series motherboards, please visit:
http://www.gigabyte.com/MicroSite/259/index.html